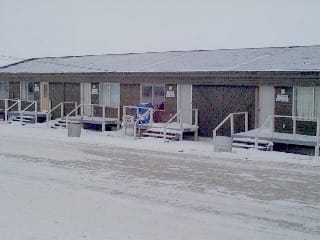 When I first reviewed the original “Arctic Slice of Life” website I rediscovered this page which I’d completely forgotten existed. The title says it’s about a meal and yes the post, eventually and briefly describes an actual meal.

But the real topic is adapting to new and different realities. I’d been forced to adapt to a new “minimalist” reality when I first arrived in Cambridge Bay. Then I was introduced to someone else’s reality which I found to be SO much better, when it comes to quality of food anyway.

First, a preamble to set the context. I feel I need to explain why I went out of my way to create a page on the website to talk about the experience of eating just one meal.

I arrived in Cambridge Bay on August 25, 1997 and the story of the meal took place on September 9. The days surrounding THE MEAL were filled with activity. All College instructors completed a two-week Certificate in Adult Education course during my first two weeks in town. The days were busy. The after hours were filled with trying to settle in to a new job, learn about new responsibilities, new people, and a new environment.

This time was also a new experience for me in that I was “roughing it.” Now “roughing it” is really a relative idea. For some it is living on the land, sleeping close to the earth, with the barest of essentials. To me, it meant living with whatever I brought on the plane the day I arrived. Granted in my case that was five big bags full of clothes, toothpaste, a cup, etc. People here have shared some really important tools for getting through a day like toilet paper, a kettle, a pan, and more recently, even a T.V. and a radio. What’s more, I had a very nice roof over my head, a $989 furnished apartment. So I had somewhere to sleep and sit, even if my stomach was relatively empty for a while. I say “relatively” because it really wasn’t ever empty; it just wasn’t as full with the same amount of food as usual.

Living in a minimalist way was something I’ve always conceived of, but have never been in the situation where I had to do it. This was a very interesting time for me. This is where the conception of being minimalist and the reality of really having to experience some of it met. I tend to spend a lot of my time in my mind. This is a strength and, yes, a weakness too.

But here was a real life situation. I have often thought about the idea of living in an isolated place where the only thing to do was learn and study and get closer to knowing things. In Japan I wondered how I would REALLY react if I lived in a Zen temple for a year. You know, that austere lifestyle of getting up at 4 am, washing your face in a basin of cold water before you starting sweeping a dirt path with a straw broom.

Where would my mind go? Would it crave the stimulation of flashing pictures on a screen or would it mellow into a state of serene knowing of the greater oneness flowing through all things? Was I now living in a situation that would allow me to test this for myself? No, not really. But at least I had a touch of this concept, living with a fork, a knife, a spoon, a cup, a kettle and some oatmeal (quick cooking, of course).

It was a memorable time. When you don’t have much, everything you do have and lay your hands on tends to mean something. For example, when you get a new luxury like a second empty plastic container of milk to store water, or a radio after two weeks without any electronic devices in the house. When those things enter your experience after so long of an absence, it makes a huge impression on you.

What is it like to actually LIVE in these “minimalist” circumstances for an extended period of time? I had one living example in my past.

This meal made a huge impression on me. First, let’s get it straight. It was only pork chops, carrots and rice. That is the hard, cold reality. Someone reading this who has three squares a day might think this was some feast of delicacies sprinkled with caviar. No it wasn’t. But it had been SO long since I’d experienced a decent home cooked meal. The experience of sitting down and eating a well cooked meal was dim in the reaches of my memory.

Here’s the scene. I was invited by Suz B. to have dinner with her and her roommate Danielle M. Of course, I refused at first. I didn’t want to put them out. But the concept of an actual meal intrigued me. What was it? It was something I hadn’t experienced for quite a while. I didn’t bother refusing three times just to be polite. I said “Yes”!

“You have to bring the vegetable,” I was told. This was a no brainer. I had carrots in the fridge, you know, the little miniature formed carrots that just don’t look natural anywhere but a veggie and dip tray. These things are as big a mystery to me as how they get the caramilk in the Cadbury Caramilk bar. Some things are must meant to remain unknown, mysterious, and strange.

An hour later, I carried my meagre contribution of carrots and apples across the street. Soon I was to see just HOW meagre my contribution really was. After a bit of chit-chat, Suz asked Danielle if this was a special occasion. I told them it was for me. This was a MEAL after all. It was special, they agreed, because I was their first visitor for a meal. That was enough of an excuse to …..have a glass of …..WINE. Yes wine, people. It was red and dry and even though I prefer wine white and little sweeter, that one glass of wine was like the nectar of the Gods.

Despite the big build up, I won’t give a play-by-play, bite-by-bite, MMM-by-MMM, of the meal itself. It tasted excellent. And what made it even more excellent was the awe I felt, the thankfulness for such a relatively simple thing. I say “simple” because I didn’t have to cook it. But I got a glimpse of how much I take for granted in life. Just that glimpse was enough to try to get the message across to you.

(The ending to this story turned into a bit of a Wonder Years clone: try reading this last paragraph with a young Fred Savage face in your mind and the narrator of the show in your brain. — Hmm, that “Wonder Years” reference might be completely lost on most readers. It was a TV show. There was always a narrated voiceover by the lead character as he looked back on his childhood experiences that had played out in the episode).