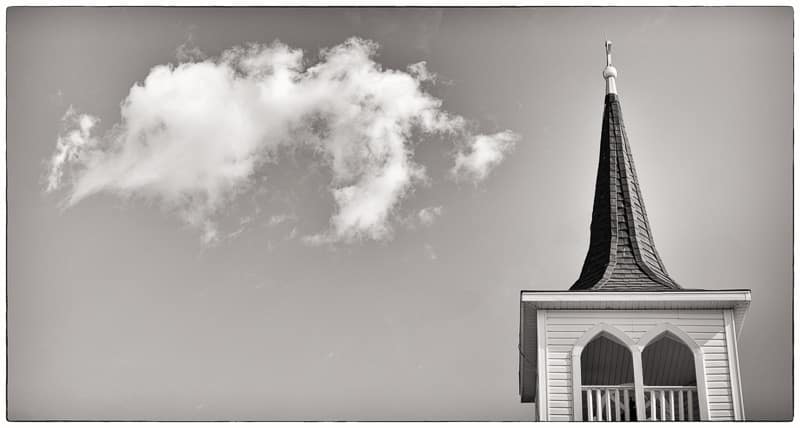 When I parked in front of the Wilhelmina Evangelical Lutheran Church near Hay Lakes I was immediately struck by the nicely-built and obviously well-kept church. The place made a strong and positive first impression.

I was there primarily to visit the adjoining cemetery to see if I could add to a “cemetery photo” project I’d started up a couple of weeks before.  In the end though, most of my keeper photos turned out to be of the church itself.

As detailed very well on the church’s website, the majority of the people in the area, the “Wilhelmina community”, immigrated from Vilhelmina, Västerbotten in the northern part of Sweden. There the church played a large role in their lives and once settled in this area of Canada, some were attending Fridhem Lutheran Church, about 10 miles away. Many, however, felt the need for a local church closer to home so that families could attend.

The church website  details the options considered for the church’s location, and the political fallout from the choice, but after all this work began on the church at the present location in 1912. The work was finished the next year, an organ purchased in Winnipeg (for $114.30) and over the next 5 years money was raised to pay for internal furnishings like the altar, lectern, and pews. Years later, money was raised for a church bell purchased for $221.47 from the St. Louis Bell Foundry in St. Louis, Missouri.

The church website  goes on to provide many more details about additional changes and enhancements to the church and using the date of the first initial meeting regarding the building of a church in November, 1908, the endeavour’s centennial was  commemorated in 2008. The place certainly doesn’t look 109 years old, a testament to how well it was built and how well it’s been maintained since.

St. Laurence Anglican Church is located in the hamlet of Monitor, Alberta. Constructed in 1915, it is registered in the Canadian Register of Historic Places. It’s been home to the local Anglican parish for over a century, but at times was also the meeting place for Methodist and Lutheran congregations and served as the hamlet’s…

The original settlers in the area around this church were Romanian Bucovinian (https://www.britannica.com/place/Bukovina ). Early services were held in homes. Although the cemetery was in use beginning 1907, land for the church was purchased in 1910 and the church built over 3 years, completed in 1913. The nearby “bell-house” was built in following years at…

Despite the title of this blog I’m including a post about an outing where no tracks at all were left behind. What, was I levitating? Well, no, but I was floating, and was happy to have stayed that way throughout the entire maiden “voyage” of my inflatable kayak this morning. After a couple of years…

On July 18, 1897 two priests sent to this area from Seattle celebrated the first Orthodox liturgy sung on Canadian soil for some 380 settlers who had gathered at a homestead across the road from this the original church “Wostok” church, about 1 mile north from the present church. A church and cemetery were completed…