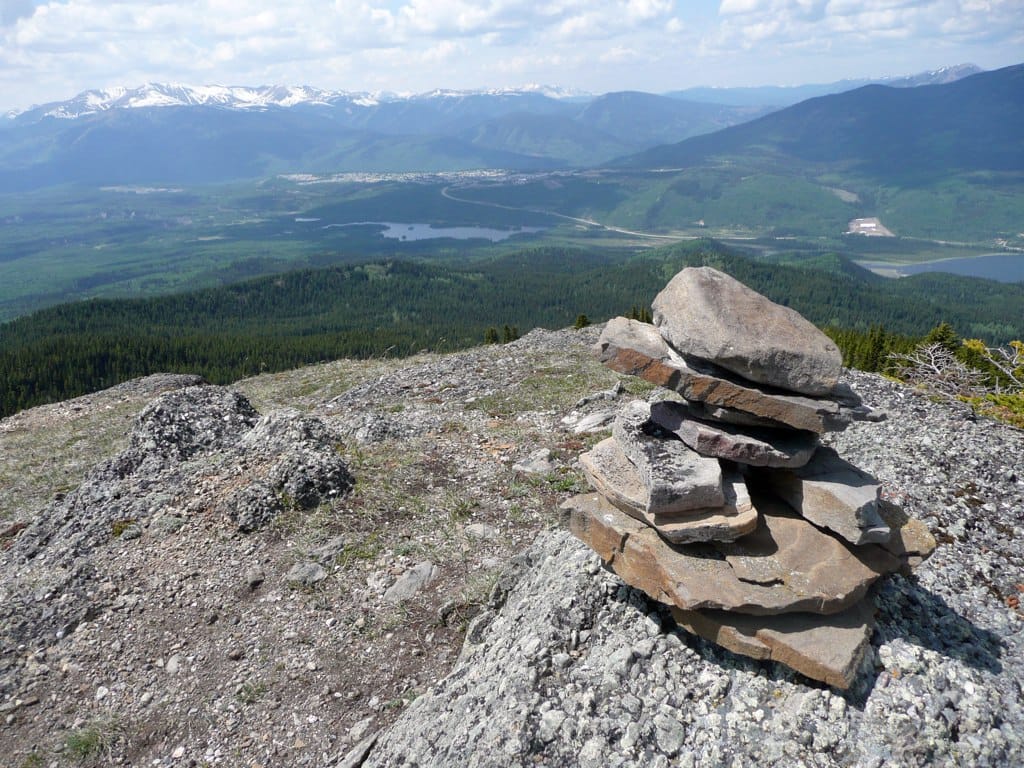 Mt. Louie (elevation 1844 m / 6050 ft.) is one of the six Bronze mountains in Grande Cache’s Passport to the Peaks program. During the 5.5 km (one way), sometimes challenging hike to the summit, there’s an elevation gain of 714 meters and along the way the reward of some breathtaking views of the mountains and valleys that surround Grande Cache.

On June 13, 2009, my friend Amy and I had little trouble finding the Cowlick Creek Staging Area parking spot (mostly because we’d done a recon the day before!). The trail started along a flat road, continued along a canal that connects Grand Cache and Victor Lakes. After crossing the somewhat funky bridge over the canal, it felt like the hike had really begun.

The ascent to the summit is done entirely on a ridge and that ridge just continues, unrelentingly, up. Because the ridge is, of course, mostly rock, we lost the trail a couple of times but were able to find trail markers fairly soon to get us back on track

On the way up we were overtaken by a local couple who were climbing Mt. Louie as something a little different from their usual routes to prepare for the locally hosted Death Race. I remember them counselling that we really should have some kind of bear deterrent with us, something I have carried along on all hikes since.

By the time we were near the summit, I have to say felt kind of like a pack mule. I was was just plodding dumbly forward, by this time too tired to be aware of my surroundings. Amy, who’d decided to take a more “switchback-like” path up, suddenly called out to me that I was actually making my way past the summit cairn! I still remember the elation when I realized we’d reached the goal.

We rested had some lunch and after I searched around a little, had fun playing in the snow that was still lingering near the summit in June.

After taking the photos at the Passport to the Peaks “mailbox” at the summit, we made our way down slowly having accomplished a really nice hike that brought some excellent views of Grande Cache from afar.

Okay, I knew it was going to be a long hike. I knew that. But knowing is only a mental concept until you actually do it. It still surprises me that this hike added up to 22 km and took me 5 hrs twenty minutes to do, 4 hrs moving, and 1 hour and 20…

When I parked in front of the Wilhelmina Evangelical Lutheran Church near Hay Lakes I was immediately struck by the nicely-built and obviously well-kept church. The place made a strong and positive first impression. I was there primarily to visit the adjoining cemetery to see if I could add to a “cemetery photo” project I’d…

The trip to the next cache was actually fairly straightforward and, as I remember it, rather tame when it came to how much it sapped my energy. There wasn’t as much elevation loss and gain to get this one and I was thankful for that. After passing the cache sight once, I circled around and…